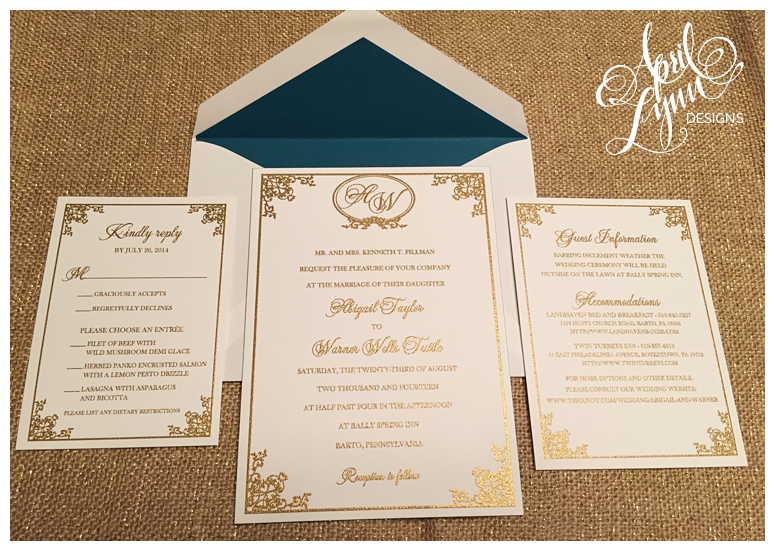 Formal invitations took a back seat for a while, but they’re coming around again in a big way. In fact, elegant, formal custom wedding stationery is actually becoming a trend! It’s so exciting.

Here are a few aspects of the formal wedding invitation that you should be seeing this wedding season:

A formal typeface for an elegant custom wedding invitation is typically a script of some kind. Blackletter styles are also very traditional, although some find them too gothic for a wedding celebration. A softer Rotunda style  Here are a few common choices:

You can’t go wrong with black and white! That’s a classic and crisp formal invitation color scheme, and it can always be punched up with gold foil or a rich jewel tone. Scroll designs, borders, and floral details often make an appearance in the corners and at the top of formal wedding invitations, usually in the same ink as the text.

A formal custom wedding invitation is can be assembled either simply or ornately. A bellyband with a custom monogram is part of a basic assembly, with the main invitation on the bottom. On top should be the other pieces in descending order of size: the accommodations card, the reception card, the response card, and any other pieces you may need.

A pocketfold is a great way to kick it up a notch. And, of course, there should be both an outer envelope and an inner envelope!

Will your invitation be formal, or will it have formal elements? Tell me about your plans in the comments!